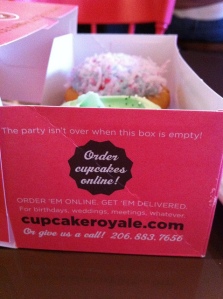 I first discovered Seattle’s cupcake culture five years ago, on a display table in a Queen Anne grocery store. Cupcake Royale packages single and double cupcakes in boxes color-coded with childhood memories of Baskin Robbins’s circa 1986–those brown cartons crowned with polka dots of alternating pink and brown. It was love at first sight.

Under the little cellophane window, buttercream frosting curled in loop-de-loops over a crisp swell of cake. Ever since that day, I have used cupcakes to mark life events. A friend’s return from abroad. My first introductions to new housemates.

Admittedly, I was a little late to the party. Jody Hall, one of Seattle’s hipster queens, opened her first Cupcake Royale storefront in 2003 and has been expanding ever since. Her Verite Coffee houses pair cupcakes with sleek white chairs, high tables, and a pale palette that reminds me of Bangkok ice cream parlors and New York brunch spots in Chelsea. Classy but unpretentious.

So I should have known better.

I drifted up to the display case of frosting-topped dreams of chocolate and lemon and vanilla bean and said, despite my terminal shyness, “Your cupcakes look so good.”

The guy at the counter was chipper. Like, Disneyland-chipper. Not the typical Seattle gloom behind the counter at more standard hipster hangouts. He had strapped himself into a pair of stonewash skinny jeans and wore a polo striped with pinks, blues, and yellows. Kid looked like a cupcake himself. Sweet and pink-cheeked and so, so young.

As he rang me up, I asked the burning question. “So what’s it like working around cupcakes all day? Do you eat one every day–or are you sick of them?”

“It’s great!” He said. “It’s the environment, you know? People who really want to be here. But what–eat one every day? That would be crazy!”

Crazy? I wondered. Since when? When would a daily cupcake ever, under any circumstances, be crazy? Even diabetics could get a sugar-free version. Where’s the crazy in that?

And suddenly, just like that, a wall slammed down between us. An existential divide more powerful than god, politics, or proper yard care.

The chipper was already cooling when I managed to make things worse. “Yeah,” he said, giving me a second chance, “my friends come to see me all the time and I give them cupcakes.”

I had meant to tease him.

The word “dealer” is becoming taboo in Seattle since the legalization of marijuana. After all, the only real dealers left sell meth, coke, and other lethal substances that will never, ever earn legitimacy even among addicts.

But my slip of the tongue was a dead giveaway. He recognized me for what I am.

Among the crowd of people he loves to welcome into his store, there must be one or two, or maybe three, of us that stare into the glass display case with desperation. Fingers twitching against the wallet. Tongue rolling over lips wet with anticipation.

That’s what I am.

And this fine young man does not approve. This is not the proper cupcake consumption. One a week, he recommended. Maximum.

In Seattle, cupcakes are desserts, not fixes. Vendors and bakers are artisans, not dealers.