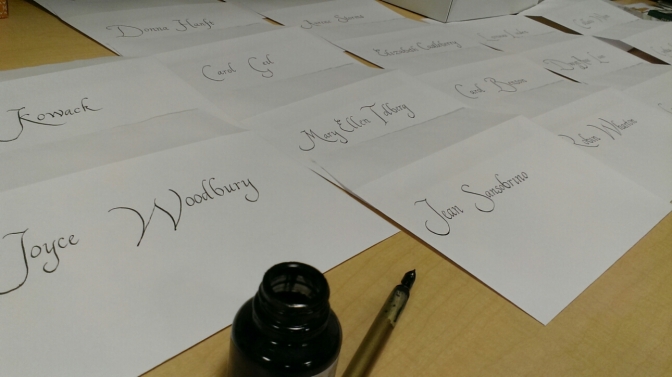 I never understood before. As a writer, I’ve always been comfortable with drafting and revising and getting shit down on the page, trusting that with a lot of hard work and a fairy sprinkle of luck, it may become worthwhile.

So when students and fellow writers came to me and said, “But I have to get it right the first time,” or “But revision is such a waste of time,” or worse yet, “I can’t keep writing until I get this part right,” I was absolutely no help. I said nice, vapid things, like “Don’t worry about it so much.”

Sometimes I worry that I even made it worse for one particular international student. She asked me after a workshop how to deal with her anxiety, so she could go ahead and write. I had no idea. Which is what I should have said. Instead, I said, “What’s the worst that could happen? I mean, you fail the paper, right? But your family still loves you, you still have your friends.”

She gave me a tense, polite smile. Who knows how high her stakes were? Maybe her parents weren’t obscenely wealthy and the tuition was just too much. Maybe they had said, “You fail one more class, and you’re done. You come home and go to a technical school.” Who knows?

But this anxiety about making mistakes is something I hear a lot, from writers especially. I never got it before.

Well I get it now.

I’m an amateur calligrapher. For the past two weeks, I’ve been addressing inner and outer envelopes for my and my fiancé’s guests. And although I hear that my calligraphy is beautiful, all I can see are the mistakes. The eraser smudged the paper there. The ink blotted here. That letter isn’t at the same slant as the rest of the word.

Instead of enjoying the process and seeing what arrangements suggest themselves as words fill the paper, I hold my breath, tensed up and waiting for the next mistake.

Thinking about the worst that could happen–I’ll have to grab a fresh envelope and start over–or trying to worry less are completely useless strategies.

Because here’s the thing: it’s not the mistake itself I’m worried about; it’s what I imagine the mistake means. It’s not so much what actually happens but rather what I tell myself might.

I tell myself loads of nasty things, from “I’m no good at this, so why do I even try?” To “God, this looks awful. She’ll be able to tell I messed up, and then she’ll think I intentionally dissed her.”

Okay, let’s overlook the fact that anyone who receives a hand-calligraphed envelope from a bride, spots a tiny blot or an off-slant letter, and thinks, “M. sure is one hell of a bitch,” is probably insane and shouldn’t have friends anyway.

Aside from that, if I were looking at myself from the outside, I’d probably use the word “paranoid.

Because let’s face it, perfectionists are paranoid.

We operate out of a grand conspiracy theory that the world is out to get us if we dare make one mistake.

So now that I have a better idea what it’s like to freeze up with the fear of messing up, I have some new advice: Stop thinking so much about yourself.

We perfectionists are also, on some level, narcissists because we believe everyone is watching us, just waiting for us to fuck up. Guess what? Nobody cares. My friends don’t care one single dribble of chicken shit if one “w” in their name looks slightly different from another. They are going to feel special. I know from experience that people keep my calligraphy of their names for months, sometimes years, after the fact.

When I swivel the white-hot spotlight away from my face and focus on how the project is going to make my friends feel, it’s a whole lot more fun. So try it. Next time you’re holding your breath and trying to make a deal with god or the devil–please don’t let me mess up–take a breath and think about your audience. Chances are, they want to relax and have fun or just feel special. Look at your work as a gift that can give them that.