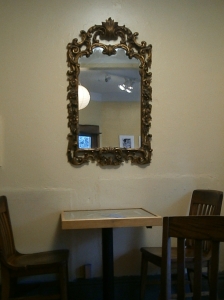 Because sometimes the honest place is the empty place. The place of uncertainty.

I’ve been talking a lot with my brother lately–this skinny white guy from a West Coast suburb who now works as an engineer on the East Coast. We’ve been talking about privilege, race, gender, social class, and orientation. I love my brother. And one of the many things I love about him is his unsinkable optimism. Nothing keeps this kid down.

It helps that he’s brilliant. Like the PBS Sherlock Holmes of current trends, he can outwit his way out of almost any situation.

But lately, he’s smashed into a wall that has shattered certain assumptions about the world.

He’s been visiting galleries and art shows in DC, and he finds himself drawn to the work of several black artists.

And he’s been told, more than once, “Why are you even here? You’re not going to get it. So just don’t try.”

The first time, this thunder-bolt of anger astonished him. And then he started asking questions. “Okay. You’re right. I don’t get it. But I want to. Tell me.” And that’s when they started blowing open his world and ripping off the blinders.

This is good. And I’m beyond proud of my brother.

But questions can only take you so far when you’re bridging deep differences.

One of the biggest challenges for us privileged folks–white, straight, upper or middle class–is letting go of this need to understand. After we ask the questions and really listen, at some point we have to face the fact that we are never going to understand completely.

When I encounter real, solid differences, it means I am encountering the unknowable. I will never really know what it’s like to grow up in America black and gay and male. I just will never know.

I can and should listen to as many stories of different experiences as I can. When we see poverty or violence or anger, we should ask questions first. I mean that: ask questions first. Assumptions are never useful, especially from outsiders. I know a white landlord who drives through poor neighborhoods around Seattle, which are predominantly black, and passes judgment.

But he can only judge from where he is standing. Which is not where they’re standing.

And the more sure he becomes of his assessment, the less he understands about how the world really works.

So ask those questions and listen to the stories. But it’s only a beginning. A shadow of understanding what it’s like to be another race or class or orientation in a society that is so often hostile toward differences.

I can never really know.

But I don’t need to, in order to respect our common humanity. And to honor the authority of others over their own experience–their inalienable right to their stories and voices and identities.