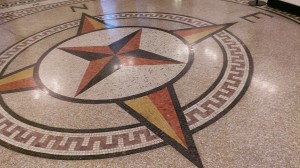 “Really.” I assured her. “Why would I? Do I seem like the type to hang out in bars?”

She laughed. “Do you need it to be harder?”

“But he looks so busy.” I eyed the bartender. A five-o’clock shadow of brown stubble over his cheeks, maybe mid-thirties, his torso built like a barrel. More bouncer than barkeep.

“I just don’t want to bother him.”

“God!” A. slumped and rolled her eyes.

I walked up to the bar.

From where he was mixing a drink, the bartender lunged toward me, eyebrows raised.

I tried to remember my line. I may have glanced at the ceiling for help.

For half a beat, he stared at the card.

Of course he saw I was bluffing. I didn’t know shit about what I was doing. I broke under his stare and confessed my sins. “I’ve never opened a tab before, so I don’t really know how to do this.”

He smiled. “No worries. We’ll do this together.”

How, exactly, was it possible to do this together? But then I caught his coy grin, the charm sliding on like cologne, and I realized he thought I was flirting with him.

I was lost as to how this could be flirtatious. I probably looked confused.

His grin slid off. “Are you serious?”

“You’ve never been in a bar before?” He didn’t look appalled. He looked disgusted.

I thought hard about that. Did Applebee’s count?

Later, I would recall a few outings with friends in college. Not many. No tabs opened. But at the moment, all that popped up in the database was Applebee’s with Grandma and pink lemonade. But I knew there was a bar section at Applebee’s, with a NO MINORS sign. That seemed legit.

He saw my hesitation and squinted at me.

Why did telling the truth make me suspicious?

Five minutes later, I returned to A. with her beer and my white Russian.

“No kidding. I can’t even remember when I opened my first bar tab, there’ve been so many.”

“I just don’t get how you’ve never done this before.”

I shrugged. How to explain right then? In my twenties, there had been the Mormonism and the green card marriage and my distrust of alcohol. Young women raised in conservative communities are often closely monitored, taught to fear alcohol and men. I was no different. My father had taught me that the world is populated primarily by rapists, and it was on me to not seduce men into criminality with my very presence. Rather than on men to not rape. Beyond curiosity, I had never had a reason to enter a bar: I had never gone on a date, and the professional networking that goes on after-hours in downtown bars had eluded me. But after my divorce, I had to overcome the fears I had been raised with before I could fully engage with the world as an independent adult.

Entering a bar, ordering for myself, and paying my own tab were small things. Even a kind of joke for people who know me.

But for me, it was a declaration of independence. A conscious choice to no longer allow fear to dictate the boundaries of my world.