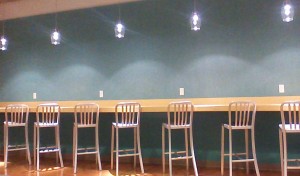 When people ask why I’ve never dated, I give the most obvious reasons. Glasses. An unhealthy obsession with Shakespeare. Shyness. Yellowed teeth. All ribs and knees, without much figure to speak of. And when I’m not writing, I’m reading.

Basically, I’m boring and bookish. And guys don’t ask me out because dating, in American culture, depends on immediate sex appeal and skillful self-presentation.

It’s not built for introverts, much less people who live in the “black and grey” spaces that Graham Greene called the world.

So I was surprised when a guy—not a stoner from the bus or a student on the verge of mental breakdown—asked me to coffee.

This had never happened before.

Well, once. Thirteen years ago.

But when I said yes, he vanished.

Would the universe give me a second chance at having a first date?

And I learned some valuable lessons from the experience.

The 30-something man who’d asked me out was a grad student and aspiring ESL teacher. I didn’t feel an immediate chemistry, but he seemed nice. If nothing else, I figured I could pick his brain about teaching abroad and maybe make a new friend. On a Saturday after my dance class, we met down the street from where I live, so we could carpool together downtown.

And the first thing I learned is not to open with anything that sounds remotely like an insult.

Me: “Sorry I didn’t notice you right away. There’s usually a homeless man standing on this corner, so I try to avoid eye contact with anyone here.”

“So you’re saying I’m dressed like a homeless guy?”

But yes. Since we’re talking about it. Yes, he was dressed like a gangster’s understudy. Oversized baggy jeans. A sport coat so puffy it swallowed him whole. Topped with baseball cap askew. He had just spent ten years teaching in Japan, and I could not fathom how he had survived—dressed like this.

I wanted to find a polite way to ask him.

But I never got the chance.

He talked the entire drive to the tea place. About 20 minutes.

Then I got us lost, circling a block about two streets down from the address.

When we had finally ordered our pots of tea, he was still talking. He went on talking for the next two hours.

It was so bad that the other tables and the cashier in the tea shop stared. Winced. As if it were painful to watch.

He even had visual aids. A tablet loaded with photos demonstrating how much his students had loved him–albums, gifts, class portraits, parties.

Had he mistakenly thought this was a job interview?

In my defense, I did interrupt. Many times. I tried to contribute something. “I hear you. There was this one time I—”

At the first syllable out of my mouth, he stared at me. Quickly, he began talking again.

He told me about a pond he liked to sit by, the after-school student who had wanted to be a flight attendant, the Cherry Blossom Festival, the boredom of sitting through theory classes now that he was back in school.

He could have been an interesting guy. If only he were capable of conversation.

And if this was dating, I was done.

“I’m sorry, but I’ve got to get going. I’ve still got a couple hours of online tutoring tonight.”

I don’t know how he heard this through his own chatter, but he did. And the evening ended.

He emailed me a few times after that.

But I drew the line when, a few weeks ago, an email congratulating himself for finishing the quarter signed off with “See you around, kiddo.”

I did not indulge my sudden bloodlust.

I finally wrote back and ended his one-sided correspondence as politely as I could.

So now I’ve seen something of what dating is. And it doesn’t excite me.

Dating is a superficial way to get to know someone. Someone who, due to the constraints of the interaction, is so consumed by the performance that they fail to notice anyone else’s discomfort. It’s all about making an impression. And controlling that impression to the best of their abilities.

I’d so much rather meet someone by chance in the checkout line at the grocery store or at the café. I dream that this person will swap stories with me about our days, that he will laugh at my relentless wisecracking, that he will be honest and warm and will say, simply, “I’ve enjoyed this, and I’d like to see you again.”

Well a girl can dream, can’t she?